In terms of appearance, Ford continues the design of the foreign version of the Ford Mustang Mach-E model. The front part adopts a closed front center grille design, and part of the headlight group has a more slender shape. The side completely cancels the traditional doorknob design but uses buttons. Switch to pop the car door. In terms of body size, the length, width, and height of the new car are 4724*1880*1600 mm and the wheelbase is 2972 ​​mm.

The C-pillar on the side is painted in two colors with a back-sliding effect, and the taillight portion is designed to retain the three longitudinal lines of the Mustang model. Furthermore, the Mustang Mach-E is split into a regular variant and a GT variant. The regular version uses a more electric car body-colored closed grille, and the GT variant adds honeycomb texture to the closed grille.

As close as you can get to a Ford Mustang Mach-E without grabbing the wheel. Explore the luxury, innovative tech, and performance in one mesmerizing 360 experience.

The interior is simple. The large 15.5-inch central control screen in the central control part is very attractive. The full LCD instrument in front of the steering wheel will display information related to driving. It has been told. That the new car will be equipped with Ford Co-Pilot360 Intelligent Driving Assistance System and SYNC+ Intelligent Information Entertainment System. Which in addition to supporting FOTA firmware online upgrade, supports L2 level automatic driving assistance functions, and is equipped with cellular car networking. (C-V2X) Technology Ford Vehicle-Road Coordinate System.

As for the power system, the SE version of the long-endurance rear drive is the same as the long-endurance rear-drive version on sale. It is also equipped with a permanent magnet synchronous motor with a maximum power of 224kW and a peak torque of 430Nm. The CLTC national standard cruising range can reach 619 kilometers, and the acceleration is 7 per 100 kilometers. within seconds.

Ford’s first all-electric Mustang model to date, the Mach-E, is set to be released in the US next year. Will also come to India. According to Autocar, the flagship EV will be launched in the country by 2021 as a completely built unit.

How much will the Mustang Mach-E cost? 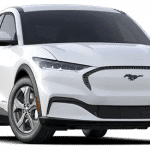 By Shubham Pal
3 Mins read
BharOS Operating System: While Google has recently confirmed. That he is ready to cooperate with the CCI. He is also facing a…
IndustryEconomyShort News Headlines

Bitcoin Price Falls Below $35,000 After Russia Advances into Ukraine

By sushant kumar
1 Mins read
Land Rover has shown an updated model of its Range Rover Velar 2022 SUV. The car has received a wide range of…