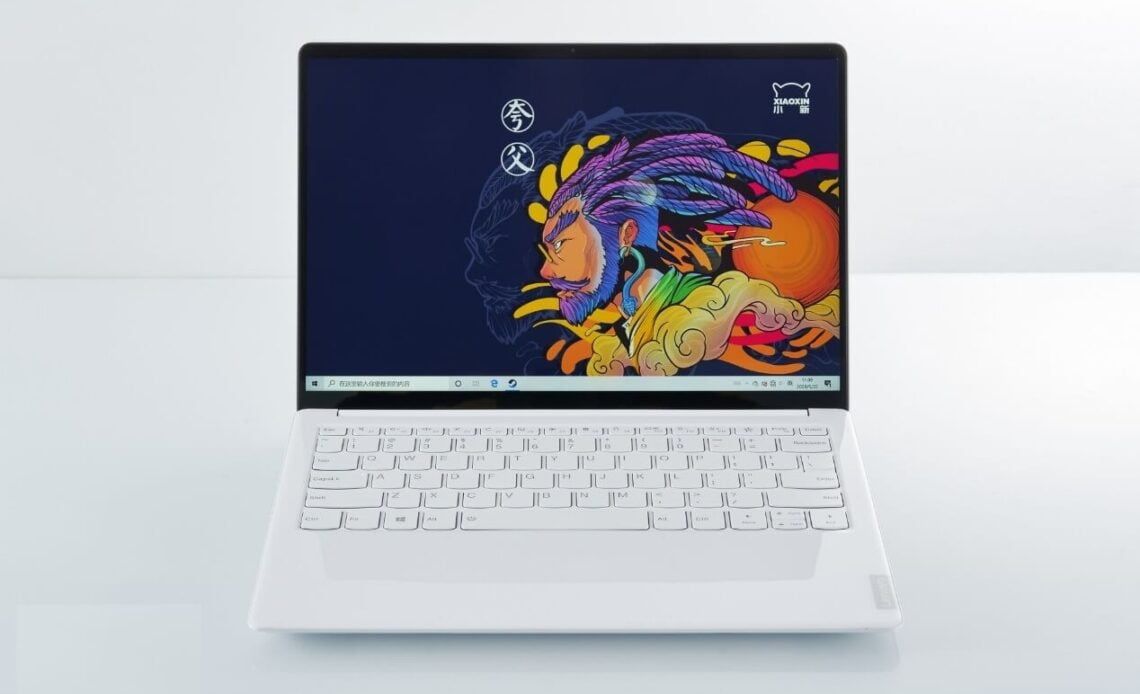 In 2019, Lenovo launched the 13.3-inch Xiaoxin Pro 13 model. Which is equipped with a 16:10 2K screen. Which is coupled with its excellent heat dissipation, radical performance tuning, and extremely high-cost performance. It quickly became a real machine. After that, Lenovo launched the core display version of the Xiaoxin Pro 13S Ice. This is an all-white version with an advanced production process. Which can be considered as “reaching the version” of the Pro 13.

Today, the product we are going to talk about. He is Lenovo Xiaoxin Pro 13s Ryzen Edition Ice Porcelain Jade. Which is equipped with the acclaimed R7 4800U processor. Which has 16GB memory and 512GB SSD, and the price is $844.

As the name suggests. The all-white color, which matches the Xiaoxin Pro 13s, has perfectly shiny porcelain and jade spirit. The price and design of Lenovo Xiaoxin 13 have been greatly improved.

This small steel cannon has a good presence in the display. Lenovo Xiaoxin 13s Ryzen Edition Ice Experience. One side of the notebook uses CNC drilling and cutting techniques. Which is not available in Xiaoxin Pro 13. It complements the white body design.

Due to the elevation of the craft, the A-side texture of the Ice Porcelain Z variant also differs from the feeling of frosted metal from Xiaoxin Pro 13 but has a more delicate and skin-like texture.

The screen of Xiaoxin Pro 13s Ryzen Ice is covered with glass. Without a plastic frame, and has a high appearance. At the top of the screen, there is a camera. Which supports swiping and logging. With Windows systems, it can quickly open the cover. You can turn on the phone and scan and log in to the one-stop service.

Lenovo Xiaoxin Pro 13s Screen Review. The screen size is 13.3 inches, 16:10 ratio, 2560 × 1600 resolution, 100% sRGB, and DC dimming. As far as look and feel are concerned. This high-resolution screen has a delicate display, and even small text will not show pixels. The latest Spyder X Elite Color calibration tool from the Udemix has set the screen parameters.

Results of the test show

That this screen has 99% sRGB, 80% P3 color gamut, and a color difference of around 1.5. It is also perfectly acceptable for non-commercial retouching.

The seaside is also the major upgrade point of Xiaoxin Pro 13S Risen Edition’s ice porcelain. It is covered with a whole piece of PMMA (acrylic), and the keycaps are also consistently white. The udemix reviewed Xiaoxin Pro 13 last year, and it takes some time to adapt to its 1 mm keystroke. This time, there is no change in the keystrokes of the Z version of Ice Porter. But the overall response is very strong. The keys are crisper, and the typing feel is somewhat better. Promote.

As shown in the picture above. The “Light Touch” version of the Xiaoxin Pro 13s integrated touchpad IcePerlin is completely hidden in the rest of the palm. You can know the touchpad from the four faint corners. In the common area, you can feel the vibration of the motor with a light touch similar to the actual pressure touch.

This design makes the C-side of the notebook a success in beauty. But there is also a small problem. If the finger slips on the PMMA (acrylic) touchpad when the finger is wet. So little “astringent” will be realized. Inferior to glass touchpad.

The left side has a dual functional USB-C interface. One is used for charging. The other can also be used to transfer data or connect to a display. On the right is the traditional USB-A and headset interface. Which can be used to connect a mouse and headset.

It is not difficult to disguise Xiaoxin Pro 13s Ryzen Ice. After opening the back cover, you can see. That R7 4800U processor enjoys the heat dissipation treatment of dual heat pipes and dual fans. Which guarantees heat dissipation for its performance release. There is 16GB DDR-3200 memory onboard under the upper shield. SSD is Samsung PM981-512GB. Which can be changed. The battery is an L-shaped design.

Lenovo Xiaoxin Pro 13s is equipped with Ryzen Ice Porcelain Yingyu R7 4800U. This top model is currently only equipped with Lenovo products. Although the commercial grade R7 Pro 4750U has also reached 8 cores and 16 threads. The frequency will be much worse.

The R7 4800U has 8 cores and 16 threads. The base frequency is 1.8GHz, the maximum acceleration frequency can reach 4.2GHz. The third level cache is 8MB, and TSMC’s 7nm FinFET process is adopted. AMD can configure TDP by 10W-25W by default. But this clearly could not satisfy Lenovo. See the roster test below.

AIDA 64 single-baked FPU test results in the above figure, room temperature is 25 degrees. The computer is flat on the desktop. The Xiaoxin Pro 13 can continue to perform 37.4 W performance when animal mode is on, and the CPU temperature is at 90 degrees.

In the CPU rendering capacity test software CineBench R20, the R7 4800U has an eye-catching performance in multi-core running scores with 8-core and 16-thread specifications.

The Lenovo Xiaoxin Pro 13s Ryzen version of the ice-ceramic enamel is not equipped with a separate display. The core display is Vega 8 with R7 4800U. In terms of parameters, the Vega 8 has 8 groups of CUs, 512 stream processors, and a GPU frequency of 1750MHz. It should be noted.

However, the Vega 8 has two fewer CUs than the previous generation of the Vega 10. With the blessing of the 7 GB process, the frequency of GPUs has increased a lot. Therefore the performance does not decrease. But increases. Next, look at the 3DMARK running score.

Udemix chose “League of Legends”, “PubG Mobile” and “The Elder Scrolls 5” to test the actual game. The test temperature was 25 degrees at room temperature. The notebook was placed flat on the desktop and the beast mode was turned on.

In “League of Legends”, 2650 × 1600 image quality is on. GPU is 80% loaded. The temperature is 65 degrees, and the CPU load is very low. Which maintains the highest frequency of 4.2GHz. The average frame rate of the game is around 84fps. The actual test proved that. That the Vega 8 has no problem playing with the “League of Legends”.

This requires higher configuration requirements and lower picture quality. The average frame rate at 1200p is 51fps. Is to achieve a smooth experience. I set the resolution to 800p. Resolution reaches 70–80fps. Which runs very smoothly. .

“The Elder Scrolls” is a classic stand-alone game. At 60fps is to get an easy game experience. You need to make the resolution 1050p.

In general, Lenovo Xiaoxin Pro 13S Raizen Edition Ice can get an excellent experience of high resolution and high refresh rates in semi-3D online games such as “League of Legends”. You can also play with slightly lower resolution. Play with the old 3A masterpiece.

The Lenovo Xiaoxin Pro 13s Ryzen version of Ice Porcelain Z is equipped with the Samsung PM981, a well-received SSD, PCIe 3.0 × 4 channels, and supports the NVMe 1.3 protocol. Sequential read speeds can reach 3583MB / s, and sequential writes can reach 2983MB / s. It is the top solid state drive in a notebook.

Lenovo Xiaoxin Pro 13s Ryzen Edition Bingciying has improved the design based on the high-priced small steel cannon. The exquisite white body, CNC diamond trim, and new vibration response touch panel can all be captured instantly, directly to the man’s heart. In terms of performance, the 8-core 16-thread R7 4800U is still one of the best choices for thin and light notebooks. The Vega 8-core display is also an online game weapon. Coupled with Lenovo’s 37W power consumption tuning, performance is the last thing. Which you should worry about.

After several upgrades, the price of Lenovo Xiaoxin Pro 13s Ryzen Edition Bingciying is only 300 yuan more than the Ryzen version of Xiaoxin Pro 13. Which makes it a machine. Which you can earn when you buy it. Currently, this notebook is purchased only through Lenovo’s official social channels. Interested friends can pay attention to this.