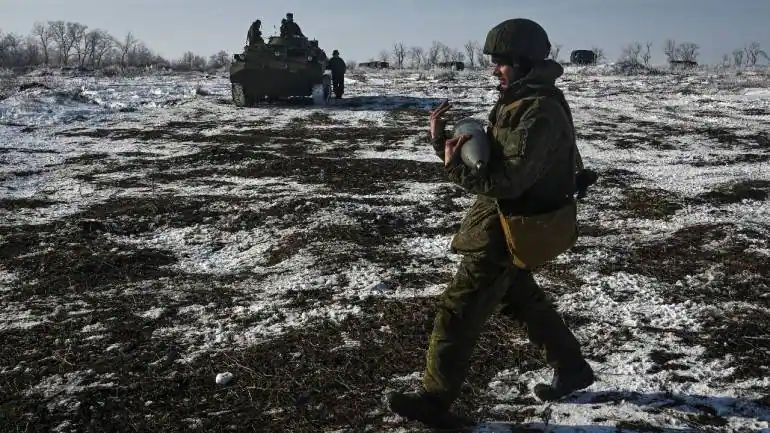 Russia Ukraine Conflict Live Updates: Russian President Vladimir Putin on February 24 announced a military operation in Ukraine to protect separatists in the east of the country. According to news agencies, Russia has claimed to destroy Ukraine’s airports, air defenses. Putin also vowed to retaliate against those who interfere with the Russian-Ukraine operation.

Explosions were heard in Kharkiv, a major Ukrainian city south of the Russian border, after Putin launched a military operation. Ukrainian forces in the city have been battling Moscow-backed rebels since 2014.

US President Joe Biden said the “world will hold Russia accountable” for an attack on Ukraine that he warned would result in “catastrophic loss of life”.

The White House warned on Wednesday that if Moscow attacks Ukraine. So Putin will face significant consequences, given that the series of sanctions announced against him over the past two days is only just the beginning.

Weeks of diplomacy to avert war and sanctions on Russia failed to stop Putin, who has massed more than 150,000 soldiers on Ukraine’s border.

A conflict zone monitor said airlines should stop flying to any part of Ukraine. Because of tensions with Russia there is a risk of unintentional firing or cyberattacks targeting air traffic control.

The Chernobyl nuclear power plant has been captured by Russian forces, an adviser to the Ukrainian presidential office, Mykhailo Podolyak, said on Thursday.

“It is impossible to say the Chernobyl nuclear power plant is safe after a totally pointless attack by the Russians,” he said.

“This is one of the most serious threats in Europe today,” Podolyak said.Russian troops took over the power plant while Ukrainian forces battled them on three sides on Thursday after Moscow mounted an assault by land, sea and air in the biggest attack on a European state since World War Two.

Some Russian military massed in the Chernobyl “exclusion zone” before crossing into Ukraine early on Thursday, a Russian security source said.Russia wants to control the Chernobyl nuclear reactor to signal NATO not to interfere militarily, the same source said.

The Chernobyl disaster in then-Soviet Ukraine sent clouds of nuclear material across much of Europe in 1986 after a botched safety test in the fourth reactor of the atomic plant.  (Reuters)

US president Joe Biden in his address on the Ukraine crisis said that oil and gas companies shouldn’t exploit the situation to hike prices. Adding the situation as a dangerous time for Europe he said the US is working to secure oil energy supplies.

The Russian military said the first day of its military attack on Ukraine was successful, AFP reported.

Prime Minister Narendra Modi on Thursday spoke with Russian President Vladimir Putin. Putin briefed Prime Minister Narendra Modi about the recent developments in Ukraine. The PM reiterated his long-standing conviction that the differences between Russia and NATO can only be resolved through honest and sincere dialogue. Modi also appealed to the Russian president for an immediate cessation of violence, and called for concerted efforts from all sides to return to the path of diplomatic negotiations and dialogue.

A newly discovered piece of destructive software found circulating in Ukraine has hit hundreds of computers, according to researchers at the cybersecurity firm ESET, part of what Ukrainian officials said was an intensifying wave of hacks aimed at the country. The company said on Twitter that the data wiping program had been installed on hundreds of machines in the country, an attack it said had likely been in the works for the past couple of months.

The United States believes Russia’s invasion of Ukraine is designed to decapitate Ukraine’s government and one of the three main axes of assault is directed at the capital Kyiv, a senior U.S. defense official said on Thursday. After President Vladimir Putin declared war in a pre-dawn televised address, explosions and gunfire were heard throughout the morning in Kyiv, a city of 3 million people.

Russian police detained at least 389 people at anti-war protests that took place in 39 Russian cities on Thursday, the OVD-Info protest monitor said. Russia launched a massive military operation against Ukraine in the early hours of Thursday. The OVD-Info monitor has documented crackdowns on Russia’s opposition for years.

News agency AFP reported that dozens of protesters have been detained at anti-war rallies in Moscow, Saint Petersburg.

Prime Minister Narendra Modi on Thursday chaired a meeting of the Cabinet Committee on Security amid Russia’s attack on Ukraine. At the meeting, Modi stated that the topmost priority of the government is the safety and security of Indian nationals, including students in Ukraine, Foreign Secretary Harsh V Shringla said.

Russian President Vladimir Putin on Thursday announced a military operation in Ukraine and warned other countries that any attempt to interfere with the Russian action would lead to “consequences they have never seen.” Following Putin’s invasion order, explosions were reported in several areas of Ukraine and air sirens went off in Kyiv, indicating that the capital city is under attack.

The mayor of Ukraine’s capital of Kyiv ordered a curfew on Thursday in comments shown on television after Russia launched an invasion of Ukraine.

A Ukrainian military plane was shot down on Thursday and five people were killed, Ukrainian police and the state emergency service said, as its armed forces sought to defend against a massive Russian military operation.

World leaders expressed a raw outrage shrouded by an impotence to immediately come to the aid of Ukraine to avoid a major war in Europe, condemning Russia’s attack on its neighbor as the European Union and others promised unprecedented sanctions to hit the Kremlin.

NATO has moved to beef up its eastern flank facing Russia and planned a virtual leaders’ summit for Friday after President Vladimir Putin warned anyone listening that any interference would “lead to consequences you have never seen in history.”

EU and NATO member Lithuania declared a state of emergency since the Baltic nation borders Russia’s Kaliningrad region to the southwest and Russia’s ally Belarus to the east. NATO nations have 100 jets and 120 ships on high alert as deterrence. “Make no mistake: we will defend every ally against any attack on every inch of NATO territory,” said NATO chief Jens Stoltenberg.

Putin a ‘dictator who will never subdue the national feeling of the Ukrainians’: Boris Johnson

Condemning the Russian offensive operations against Ukraine, UK PM Boris Johnson, in a televised address to the nation, referred to Russian President Vladimir Putin as a ‘dictator’ who will never ‘subdue the national feeling of the Ukrainians’.

Former US President George W Bush condemned Russia’s attack on Ukraine calling it the ‘gravest security crisis’ on the European continent since World War II. ‘I join the international community in condemning Vladimir Putin’s unprovoked and unjustified invasion of Ukraine,’ he said in a tweet.

Indian Ambassador to Ukraine urges Indian citizens to maintain calm, stay put at their respective cities and wait for support from the Mission in evacuation.

Timeline of advisories issued to Indian citizens in Ukraine

February 20: Air India was considering postponing flights due to no bookings from Ukraine.

February 22: Fourth Advisory issued regarding online classes by Ukrainian Universities as many students were not willing to leave in absence of online classes.

February 22: Two Russian speaking officers sent to Kyiv to help with the return of Indian nationalss

February 24: Advisories issued regarding the following:

● Advised to return to respective cities temporarily,
● Closing of airspace and alternative arrangements for evacuation; relocating to western areas; number of helpline increased.
● Regarding martial law imposition, and not to leave homes and hostels

Ukraine police say Russia has carried out 203 attacks on Thursday

Ukrainian police on Thursday said Russia had carried out 203 attacks since the beginning of the day, with fighting going on almost everywhere throughout Ukraine’s territory.

In photos: Bombing hits the eastern Ukraine town of chuhuiv.

chuhuiv, in eastern Ukraine, was hit by bombs Thursday as Russian military forces attacked the country from several directions. Firefighters raced to extinguish a fire, first aid responders administered to the injured, and residents mourned the dead.

‘How can we not panic’: Indian students in Ukraine plead for the safe return

Around 4 am Ukrainian time, Akanksha Katiyar was jolted awake by the noise of a distant explosion that shook the building and set off the sensors of cars parked in the neighborhood.

A few blocks away, Aruj Raj VN, who is running a temperature, had an early morning knock on the door with friends coming over with reports of grim developments unfolding across the region.

With Russia announcing a military operation in Ukraine, thousands of Indian students enrolled in Ukrainian higher education institutions – mostly studying medicine – are in a state of panic and pleading with authorities to ensure their safe return to India.

Russian helicopters on Thursday attacked Gostomel, a military airport near the capital of Kyiv, and Ukraine downed three of them, Ukrainian officials said.

Ukrainian border officials said that the Russian military was trying to penetrate into Ukraine’s Kyiv region and its Zhytomyr region on the Belarusian border and that Russia was using Grad rocket systems.

In a fresh advisory, the Indian embassy in Ukraine asks nationals to stay in bomb shelters

The movement of people is now difficult in Ukraine as it is under martial law and those hearing air sirens and bomb warnings should find nearby bomb shelters, the Indian embassy in Kyiv said in a fresh advisory to Indians there. ‘As you are aware, Ukraine is under martial law, which has made movement difficult,’ it said.

It said for those students who are stranded without a place of stay in Kyiv, the embassy is in touch with establishments to put them up. ‘We are aware that certain places are hearing air sirens/bomb warnings. In case you are faced with such a situation, google maps have a list of nearby bomb shelters, many of which are located in underground metros,’ it said.

‘While Mission is identifying possible solutions to the situation, please be aware of your surroundings, be safe, do not leave your homes unless necessary, and carry your documents with you at all times,’ it said.

Explained: How Russia’s invasion of Ukraine could impact Indian exports

India’s trade with Russia has not yet been severely impacted by the rising tensions in the border region of Russia and Ukraine, but there is the looming prospect that it could be impacted if wider sanctions on Russia are announced.

Russia is India’s 25th largest trading partner with exports of $2.5 billion and imports of $6.9 billion in the first nine months of FY2022. India’s key exports to Russia include mobile phones and pharmaceuticals while India’s key imports from Russia are crude oil, coal, and diamonds. Tea is a major export item from India.

India’s exports to Ukraine were about $372 million in the April-December period led by pharmaceuticals and mobile phones, while imports worth about $2.0 billion are dominated by sunflower oil and urea. Together exports to both countries accounted for under one percent of India’s exports in the first three-quarters of this fiscal.