Thor: Love and Thunder | official Trailer, ‘All Gods will die’: Gorr vs Thor, Zeus, Mighty Thor, and all the other characters Highlights. 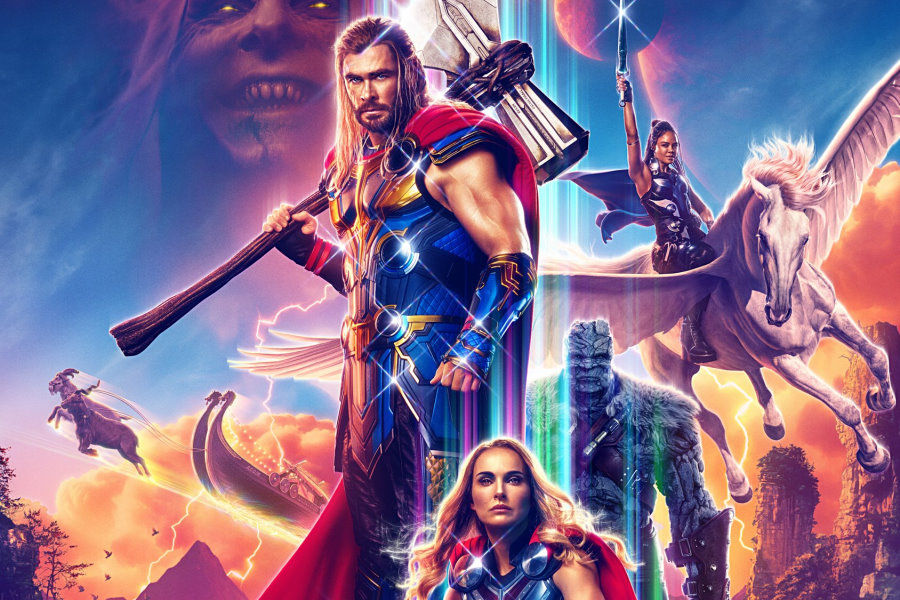 All Gods will die’: Gorr vs Thor, Zeus, Mighty Thor, and all the other highlights from the ‘Thor: Love and Thunder’ trailer

The trailer for the Chris Hemsworth, ‘Thor: Love and Thunder’ dropped during an NBA game, with Christian Bale first seen as an observer. Gorr the God Butcher. The trailer had a lot for fans to feast upon whether it’s the first look, the exact comic book scenes, new costumes, and of course, the new villain in the MCU.

The Marvel film directed by Taika Waititi is the sequel to 2017’s ‘Thor: Ragnarok and marks the return of Thor in the Marvel Cinematic Universe after ‘Avengers: Endgame’ in 2019. It also stars Tessa Thompson as Valkyrie, Chris Pratt as Star-Lord, and Waititi as Korg. , and Natalie Portman as Jane Foster, the film will see Thor attempting to find inner peace. Only to be interrupted by Gorr’s killing spree.

The theme of ‘gods’ plays an important role in this story. Korg, at the beginning of the trailer, introduces Thor as a Space Viking and says: “He was no ordinary man, he was a god.” In Avengers: Infinity War and Avengers: Endgame, we saw Thor’s fall from Grace, where he abandons his duties and even moves from the throne of Asgard to the Valkyrie. However, this film takes him on a new path and a new mission. To hunt down a mysterious figure who is leaving behind a trail of death and destruction.

The God of Thunder gets in touch with his inner feelings when he is reunited with his former flame, Jane Foster. Who is now the mighty Thor? The clip promises several fight scenes on the ground, in space, and in the city of Olympus. Only to set it up for the final battle with Gorr in a dark void. “You are not like the other gods I killed.” Gorr says in a threatening voice, to which Thor replies, “Because I have something to fight for.”

Who is Gorr the God Butcher?

Christian Bale finally enters the MCU as the deadly Gorr the God Butcher. As per the speculations, ‘Thor: Love and Thunder’ could make the next biggest villain of the MCU. Which might even put Thanos to shame. As for the comics, he even captures Thor and keeps him as his slave.

It will be interesting to see if the film gives the backstory to the character which is full of tragedy. Born on a distant planet, Gorr was taught to worship the gods. He reaches this conclusion. That “all God takes care of himself,” when he is left to watch helplessly as his wife and children die of hunger and disease.

Their ‘prayers’ are answered in the form of the mighty alien sword of the symbiotic God Nul. Once he lays his hand on the sword. So he vows ‘death of all gods’. We get a glimpse of that power as he slams the sword into a planet-like body which then explodes.

Does Zeus stand a chance against Gorr?

Russell Crowe made his Marvel debut as Zeus in ‘Thor: Love and Thunder’. After teasing his big appearance in the first teaser, we get our first full glimpse of him in golden armor on his throne. We are also given a glimpse of his powers. Because he is able to ‘uncover’ Thor’s disguise with the flick of his fingers. While it is known that Crowe will have a cameo in this film, it remains to be seen. If the Lord of Gods would also become one of Gorr’s many victims.

The corpse of Falligar the Behemoth

Folligar the Behemoth, which first appeared in the teaser. Will probably play a major role in tipping the scales in this film. A lesser-known fact is that the gods of the Galactic Frontier are friends with Thor. This scene from the film which sees his lifeless corpse. Originally featured in the comics in which Gorr makes his debut. In the film, this may be the time when Thor learns that there is danger at hand and that someone is hunting the god.

​Jane Foster as the Mighty Thor

Natalie Portman’s character Jane is set to return to the franchise this time as the mighty Thor. According to Jane’s conversation with Thor in the trailer, it appears. That she may be one of the victims of Thanos’ snap. Which leads her to believe that her time apart from her ex-boyfriend was only 3-4 years. Whereas Thor rightly called him, “8 years, 7 months and 6 days.” Given that he now has the powers of Thor and is also ‘qualified’ to wield Mjolnir. The clip shows that he may have different powers than Thor. Whereas the god of thunder used a hammer to summon lightning. Jane seems to be tapping into the different powers and possibly tosses each piece of Mjolnir separately and shreds it back together.

In a blink-and-you-miss-it moment in the trailer, Valkyrie Gorr is seen fighting a lightning bolt. Which is synonymous with Zeus. It is not clear whether the villain manages to kill Zeus in the city of Olympus. prompts the Valkyrie to take the Bolt. Or if the ‘God of God’ simply hands it over to the King of Asgard to help him fight his common enemy.

Take out your popcorn. It’s time for the story of the Space Viking, Thor Odinson. He was no ordinary man – he was a god. After saving planet Earth for the 500th time, Thor embarked on a new journey where he came into shape. He went from dad bod to god bod! And finally, he regained his title as the one and only Thor…

The latest trailer for Marvel Studios’ Thor: Love and Thunder reveal new details about the God of Thunder’s latest adventure. Including a trek to Olympus where Zeus (Russell Crowe) reigns supreme.

The film finds Thor (Chris Hemsworth) on such a journey. The quest for self-discovery that he has ever encountered. But his retirement is interrupted by a galactic killer. Who is known as Gorr the God Butcher (Christian Bale). One who seeks the extinction of the gods. To counter the threat, Thor enlists the help of King Valkyrie (Tessa Thompson), Korg (Taika Waititi), and ex-girlfriend Jane Foster (Natalie Portman). Joe – to Thor’s surprise – inexplicably uses his magic hammer, Mjolnir. Powerful Thor. Together, they embark on a harsh cosmic adventure to uncover the mystery of Lord Butcher’s vengeance and stop him before it’s too late.

By sushant kumar
3 Mins read
After a break from the Marvel Cinematic Universe, Natalie Portman is back in the first teaser for “Thor: Love and Thunder” and…